To Prove or Improve- Exploring the Fixed & Growth Mindset 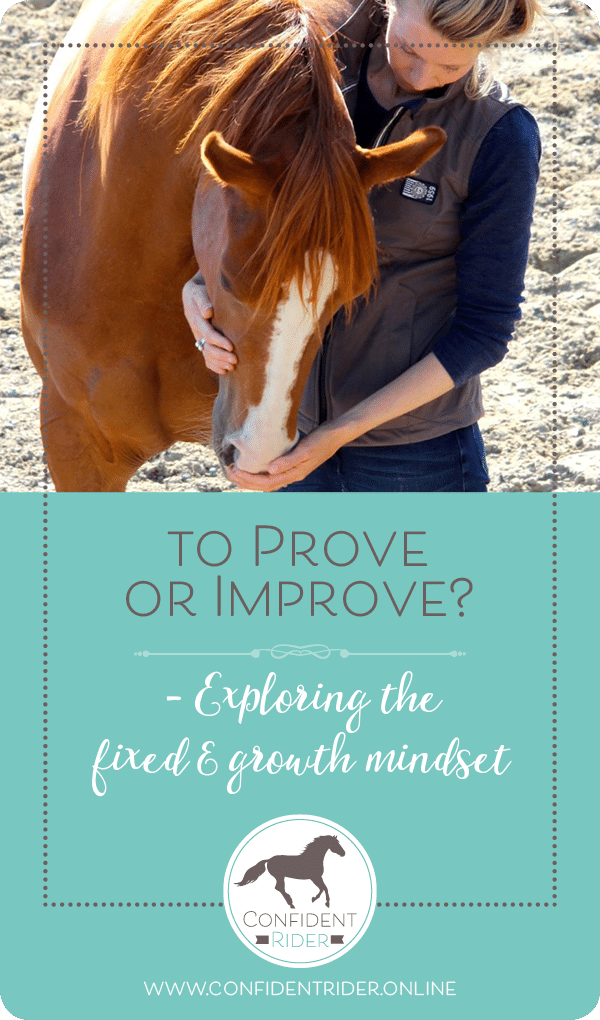 At one point during the movie “Buck”, a documentary about the life of horseman Buck Brannaman, his foster mum, Betsy Shirley, turns to the interviewer in her amazing, sprawling accent and tells him, “He never showed any early signs of genius”. It made me laugh out loud at the time and it’s continued to ever since; in fact I repeated the same quote out loud to my husband only the other day as I watched my young horse attempt to navigate some trot poles for the first time in the arena. Definitely no early signs of genius apparent at that stage (don’t tell him I told you that, mmkay?).

As a culture, we love the idea of genius, of innate talent. We love to see it in others; sports stars, those who we consider to have a special “something something”. In science and the arts. Pretty much everywhere. A large chunk of our social narrative is built around our reverence of those with special gifts or abilities that separate them from the average person in the street. It’s fascinating to us.

Not only do we love a bit of genius in others but we especially love people to see it in us.

You’re a natural! That comes so easily to you! You’ve got a talent for that!

Who doesn’t love to hear that?

Although it can seem harmless enough, cultivating an identity from a place of innate ability rather than time invested in learning and mastery has its pitfalls. In fact, our willingness to embrace opportunity, to try new things and ultimately “put ourselves out there”, even at the risk of failure, all comes back to whether we whether we are in it to prove or in it to improve.

Fear of failure, worrying about what other people think, or being afraid of trying something new all comes under the “prove” mentality. When you are out to prove something, or fear that you could potentially be embarrassed or come unstuck by an inability to prove something, then you are operating from Carol Dweck describes as a fixed mindset.

A fixed mindset doesn’t allow for much wiggle room. The fixed mindset arises from the belief that the qualities that you have that you would kind of like to hang on to thank you very much are an innate part of you, rather than something that has been learned and cultivated over time. So instead of reaching, expanding, learning, we spend our time describing, documenting and defending. And what’s more, we most certainly don’t put ourselves in positions where we could potentially be challenged or come unglued. After all, if we are out to prove something, it’s become so much more than the activity or event; now it’s about who we are as people and as riders.

As a mindset and mental skills coach, one of the most common fears I hear about is the fear about what other people think.

“I hate it when people are watching from the sidelines, I just freeze up.”

“At the barn I ride at, there’s always a crowd. I’m pretty sure they are talking about me”

If you are looking for an approving glance, an admiring comment or any other form of validation from an external place, then you hold yourself at the mercy of a host of changeable and fluid forces- other people.

The flip side of that? Improvement. If you goal becomes to improve, then you are operating in growth mindset territory. The recognition exists that in order to progress, increase your skill level and competency and move forward from where it is you are now to where it is that you want to be, you will need to learn to tolerate a degree of discomfort along the way.

If you read the stories of any of the great horseman (pick whichever one springs to mind!) and search back through time, no doubt you will discover a long history of trial, error and experimentation. You will see a focus that is motivated by “how can I learn to do this better?” or “what is the best way forward here?” You will see the idea of failure being almost irrelevant when juxtaposed against the possible learnings that will extracted from the same set of circumstances.

So the next time you find yourself stuck, confused or unsure how to proceed, check in with yourself. Are you out to prove or improve? The search for the latter will never let you down.