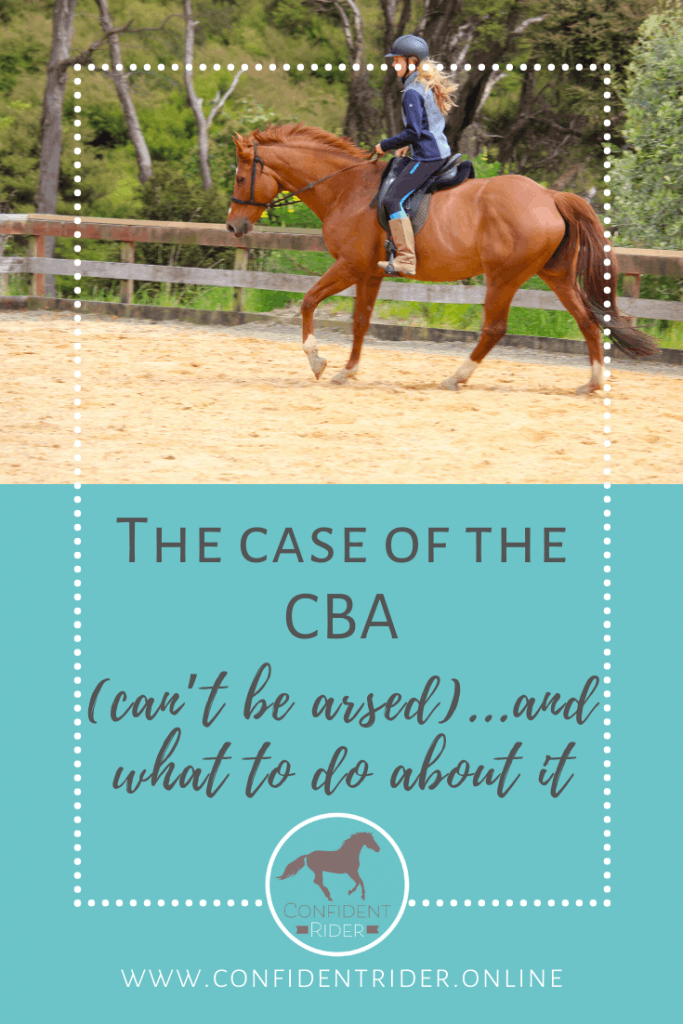 As someone who throws their whole arse into most of everything they do (no half arsing here!), I always find it vaguely disconcerting when the whole “can’t be arsed” feeling comes to town. The thing about swimming in CBA’d (can’t be arsed) is that while you are busy NBA (not being arsed), you actually really WTBA (want to be arsed) but there is simply no arsing to be had. It’s a complicated situation.

A day or two or CBA is fair enough- after all we all have our off days- but when it lurks into a series of days, weeks, or even months, then we know that this whole CBA situation needs to be looked at with a little more care and attention than perhaps we’ve devoted to it previously.

While for some, the whole CBA is thrown around like a badge of honour, most of us are no longer teenagers wanting to use it as an inane but slick sounding excuse for not cleaning our rooms. For those of us really WTBA (wanting to be arsed), we recognize it as a lack of motivation, creativity, inspiration or mojo; we might be steppin’ but there ain’t no spring in it.

Let’s look at some common reasons why you might be feeling a little flat (and consequently, a little half-arsed).

Unromantic I know, but chronic tiredness is really quite the thing- and we can only ignore the signs telling us we need to get some rest for so long. The thing about tiredness is that you can ignore it to a point. Sleep often feels like an optional extra; something we can cut down of, get less of or squeeze in here or there because, well, busy. We control our sleep, not the other way around.

Ignoring the warning light on the dashboard, however, does not make the problem go away. In fact, many times, it means the problem becomes bigger until the whole “will I, won’t I” situation is no longer a choice you get to make. Your body and mind (and at times it feels your heart and soul) are ground to a halt and rest is no longer optional; it’s enforced.

Call it burnout, no motivation, or CBA- in many instances, grinding you to a literal halt is the only way your body can get you to pay attention. It may not feel good emotionally, but at this point, feeling good about it is the least of your body’s concerns. You need rest stat and we are going to SYA (sit your arse) here until you get some.

If the feeling of CBA has been with you for a while, consider how much you allow for rest, recuperation and revitalization in your day. ARE they even considerations? Or are you burning the midnight oil under the false premise that your body will just keep up, no matter what?

I’ve noticed (and dealt with myself) a lot of guilt around allowing for even small periods of rest in the day. We are addicted to constant busy-ness, often as a means to prove our self-worth and validate ourselves. I know I have fallen into the abyss of feeling like my value is directly equated to how much stuff I can get done.

Stillness, however, is enormously productive. It’s the point from which everything else is born. Not allowing yourself enough of it is not only unproductive but means that you may well be on a fast track to a lingering feeling of CBA.

The take home message? Rest. You probably need to get more of it.

You’re going in the wrong direction.

The CBA feeling can also be a friendly reminder from your intuition that things are really lining up at the moment. It might be that you are going in a direction that doesn’t work for you, doing something you feel like you should (but don’t really want to), or have just taken a wrong turn; in this case, while it feels like something you want to be rid of, the CBA feeling is allowing you that all important take five to get a handle on what it is that you really do want.

If you find yourself feeling apathetic or like your mojo has left the building, consider the following questions:

Is the direction you are heading lining up for you, or does something feel off?

Are you doing what you really want to be doing?

Can you think of something right now that really excites you (even if that thing is outside the scope of what you would normally consider doing or how you typically define yourself)?

Give yourself a few moments to consider the direction things are moving in and if they’re really working for you. Oftentimes, tweaking the compass by only one or two degrees allows for huge shifts in how it is we feel and our ability to re-apply ourselves to the task at hand.

You need some help.

CBA has a very close sister, and her name is Overwhelm. Overwhelm can be a little sneaky because she is queen of distortion and confusion. The irony is that with “all the things” that we feel like we need to do, overwhelm leaves us doing no-things; it simply feels like too much.

Overwhelm can strike for a number of reasons; it might be that you have a lot going on and are struggling to keep up. It could be that you feel out of your depth (in skill level, understanding, knowing where to take things) when it comes to dealing with a current situation with your horse (or away from them). It might be that you’ve been overloaded for a while and actually need to start delegating some of the things on your list to someone or something else. Whichever ticks the box for you, asking for help is a great panacea for curing the overwhelm lurgy.

You have a lot going on: Decide what constitutes the highest and best use of your time. What on your list falls under the bracket? What can you delegate or ask for help with?

You feel out of your depth: What specifically feels too much right now? Who can you ring, message or contact to get some help with that?

You feel overloaded: Refer to “You have a lot going on”

In each and every one of these cases, asking for help is the thing to do. It may not be that you find the perfect solution for your thing but reaching out in and of itself can provide clarity and help ease the load. It also gets you out of your head and into the “taking action” space, which goes a long way in easing the mental tension and buildup that cumulates over time when we feel metaphorically and literally in over our heads.

Lacking clarity (otherwise known as confusion) can be a royal dream killer and a key reason why CBA creeps up on you. If you are in the midst of a mojo-less period, consider whether you are actually clear on what you want, and the steps needed to get there. When we lack clarity over an extended period, you can end up feeling like you’re treading water; there’s no sense of forward, it’s all up and down.

What is my intention?

Am I clear on what I need to do?

What actions do I need to take to get there?

Clarifying your intention shines a laser beam through ambiguity (and any consequent CBA-ness arising for this reason). If in doubt, get clear on what yours is and decide how it will inform your actions moving forward.

Things are actually coming together.

This one might come as a surprise, but a short burst of CBA every now and then is essential. Sometimes, when we aren’t ready to act- when the thoughts, ideas and learnings are still swimming in the ethers- taking the time to work things out and marinate on something can be mistakenly interpreted as negative form of CBA, when it fact it’s an important part of the learning process.

CBA can also be allowing for assimilation and metabolization of new information, understandings and ways of going about things. We’re like a human trifle; we have to make sure the good stuff gets through to every layer.

If you are in the midst of upskilling or soaking in new information, this could well be the exact type of CBA situation you find yourself in. If so, cut yourself some slack. Intense learning takes a lot out of you and CBA may just be giving you the time you need to make sense of it all.