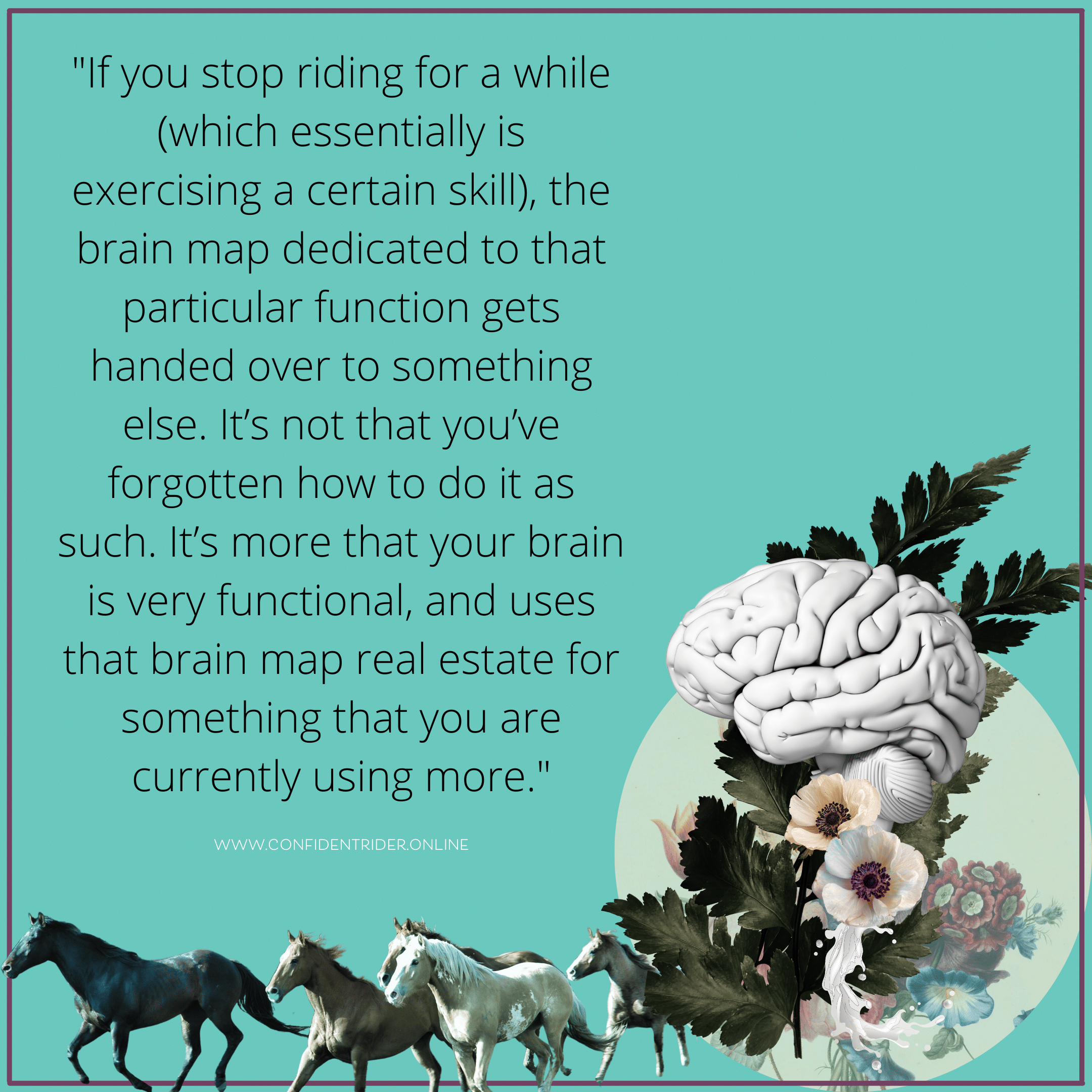 Honestly, if you are feeling a bit down on yourself, struggling with your horse, or finding that the Itty Bitty Sh*tty Committee is speaking to you today with particular ferocity, the best antidote I can provide you with is to learn a bit more about what actually makes you tick. And I mean that literally.

Let’s talk about your brain for a moment.

Your brain has a series of maps that are dedicated to a specific set of functions. You have a map for more tangible things, like the position of your bones and your organs, and you have maps for more abstract things, like language, or specific skills, like riding your horse.

To keep it simple, a brain map is a network of neural connections in the brain that are dedicated to a particular function. Scientists used to think that each map or location was fixed and that if that area remained unused or got damaged it simply withered away but the reality is this is very far from the case. In fact, the nerves and neural networks of your brain go out of their way to make themselves useful. So, if you aren’t using them for the purpose that they are designed, they simply… find another job. They go to another part of the brain where they CAN be used, or at least help support the part of your brain that is serving a particular function or purpose.

It’s because of this that some brain maps get bigger (we are simply paying more attention to them and using them more) and some get smaller (for the opposite reason).

This phenomenon actually has a proper, grown-up name. It’s called Competitive Plasticity. It’s the reason that if we have a break from riding and come back to it, it might feel like we’ve lost our edge. And it’s also the reason why the art and process of becoming proficient at a new movement or skill is more about unlearning than anything else.

Let’s break both of those down…

In the case of having a break:

If you stop riding for a while (which essentially is exercising a certain skill), the brain map dedicated to that particular function gets handed over to something else. It’s not that you’ve forgotten how to do it as such. It’s more that your brain is very functional, and uses that brain map real estate for something that you are currently using more.

If you or your horse is “rusty”, you’re looking at a brain map change.

In the case of learning a new skill:

In many cases, we think of learning as dropping new bits of information into a container, but it’s moreso about adjusting brain maps. The information that you hold onto and value currently takes up a certain real estate in your brain, and in order to learn something new, we have to be willing to let something go. I don’t mean this metaphorically- it’s very literal. You have to be willing to hand over a part of your brain map to something new, which means letting go of the real estate it currently takes up.

That’s why learning is as much, if not more, about un-learning. The maps that are currently dominant need to move aside to let something else take root.

How amazing, and fascinating, is your brain.