Looking At Your Position? Look To Your Nervous System 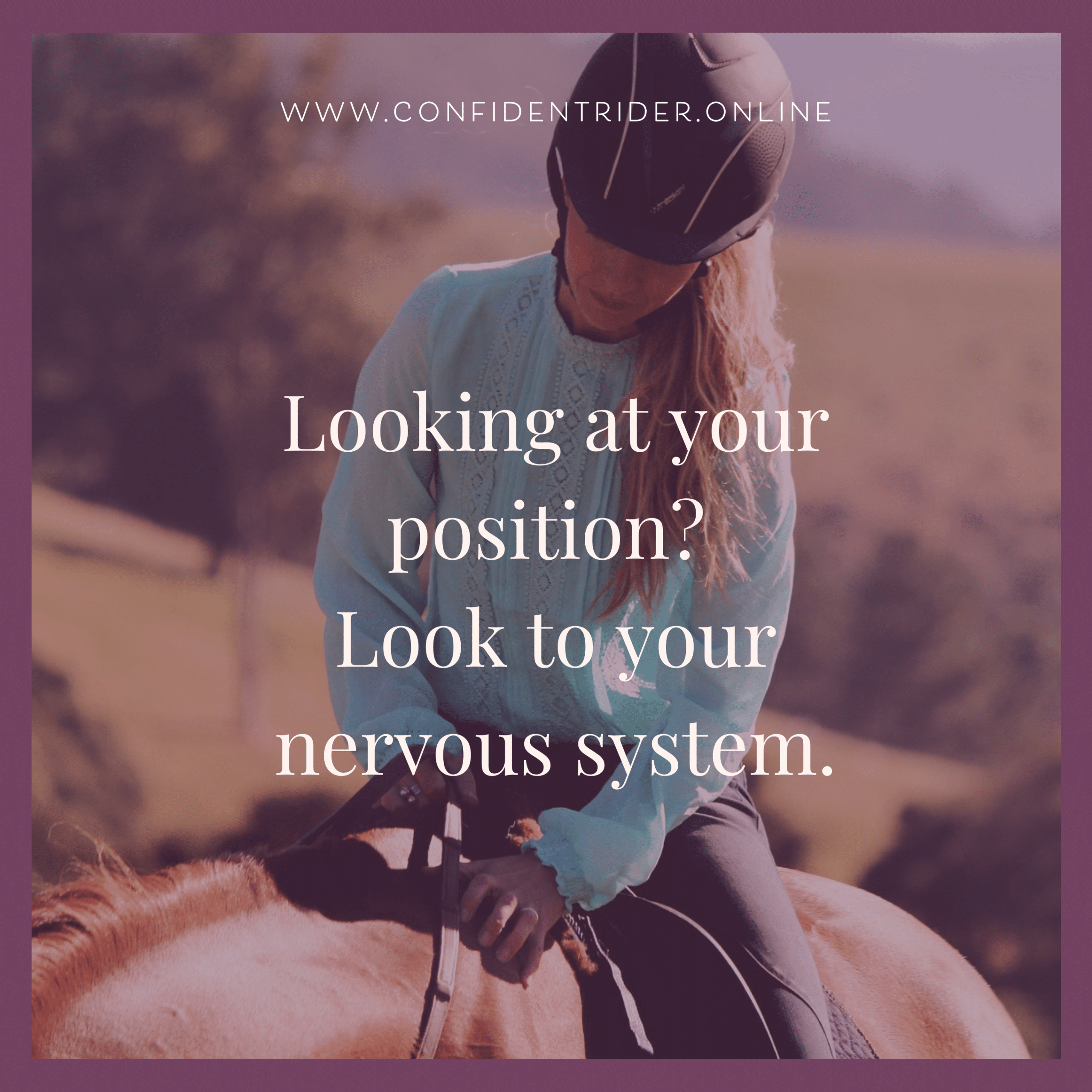 When most people think of the nervous system and what working with it might address, the most common response is mental and emotional. Very few people (in my experience at least) consider it when it comes to addressing challenges in position or movement, and yet it’s your autonomic nervous system that’s “in charge” of how structurally you are positioned at any moment in time.

Take this example. A little while back in one of the live Q&A sessions in my membership program, a member described a riding lesson she had that previous week. Her pelvis tends to be tucked up and under in the “chair seat” position, which has flow on effects for how the rest of her body holds itself in space.

Her instructor directed her to sit up.

Use your abs, she was told.

Bring your shoulder blades together!

That sounds exhausting, I told her, remembering to do all that. And then you still have to ride your horse.

The thing is, I know this pretty much the norm.

Let’s explain things from the level of the nervous system.

How the body powers movement is different depending on where your nervous system is sitting. If we look at the pelvis in isolation, in the parasympathetic system, the two sides of the pelvis are moving on the transverse plane, allowing the torso to move forward and backward in space as a single unit, without any one part of the spine being compromised.

In the fight/flight nervous system, however, the pelvis adopts more of a teeter-totter action, rocking forward and back on the sagittal plane. The power to move the pelvis then comes from the lumbar spine, and relationally for the shoulder girdle, from the cervical spine.

A “chair seat” is a sympathetic, or fight/flight position of the pelvis. It’s where the dominant motor pattern for the pelvis is a sympathetic one. Unless we change the motor pattern on a neurological level, the only likely movement range will be posteriorly tilted (chair seat) or anteriorly tilted (leaning forward). In this instance, “neutral” does not exist, and is certainly not something that can be consciously influenced.

If we continue, the chair seat is naturally going to cause a rounding through the shoulders. Asking to draw the shoulder blades together is yet another sympathetic pattern (it’s a fight pattern) and drawing on abdominal strength is now using the outer tube of the body to support what the internal mechanisms are designed to do.

What’s more, you are only going to be able to hold this while you are consciously thinking about doing so, and all the while you are triggering your survival nervous system, making it impossible to assimilate or take in new information in any other way then repetition and rote learning.

The positioning of the structure of our body is under unconscious control. You cannot “think” your way out of a sympathetic position of the pelvis. The movement practices I teach in my membership program are based on nervous system biomechanics that allow us to change our motor patterns so the dominant modes of movement are rooted in the parasympathetic system.

Not only do sympathetic motor patterns compromise the body, but they also inadvertently cause our fight/flight nervous system to be triggered all day long, even when it’s not functionally required.

If you want to work on your position, work with your nervous system.

Apple Podcasts
Spotify
PrevPreviousYou Don’t Owe It To Anyone To Be Inspirational: A Muddled Conversation On Chronic Pain
NextLooking At “Emotional Control”Next