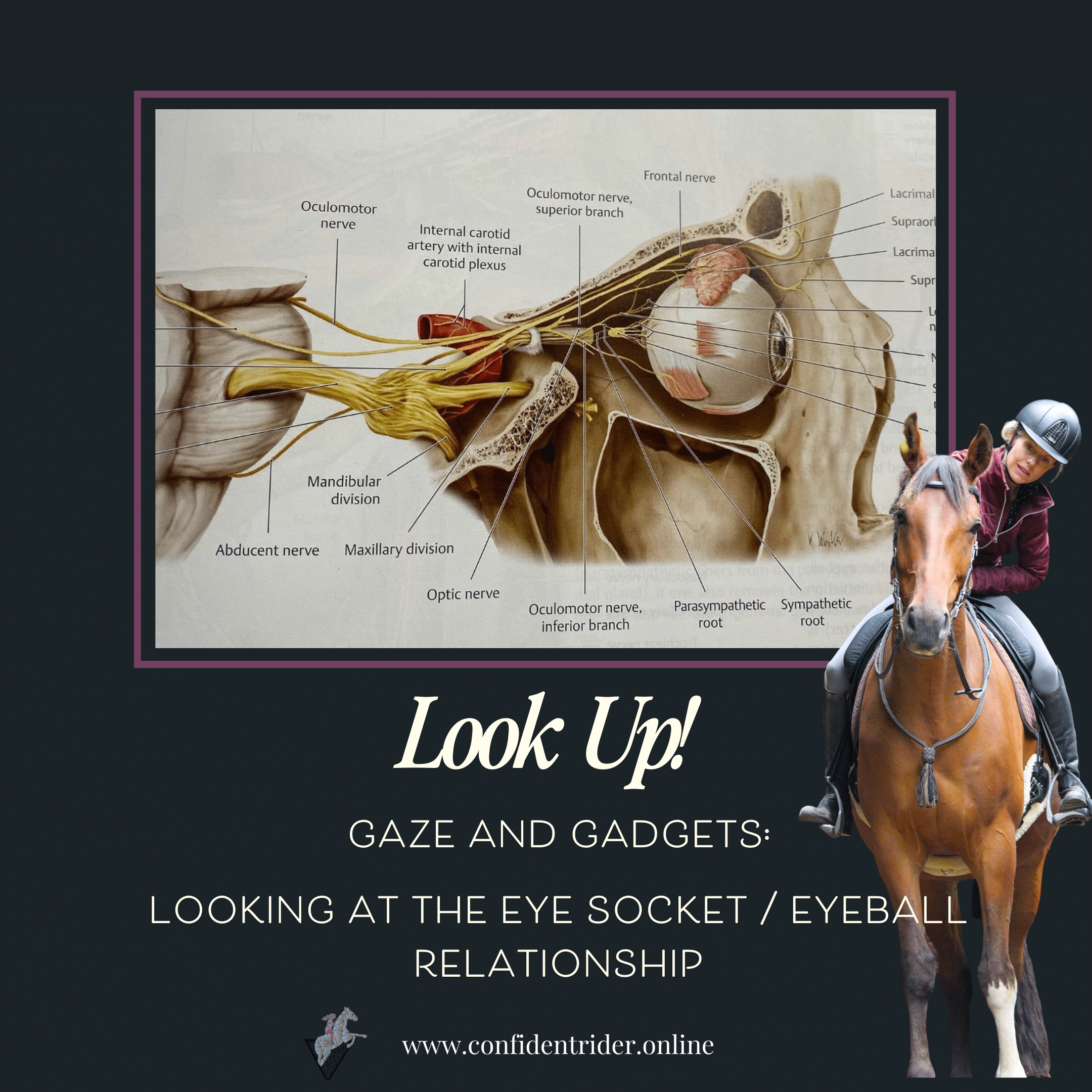 This story has two parts. The first part involves something that popped up on my timeline (that created the inspiration for this post in the first place) and the second involves a merry wandering through the workings of our incredible body to hopefully share a different perspective and understanding- one that you may not have considered before.

Let’s start at the beginning. I’m sitting and scrolling through my feed when a post comes up advertising some glasses for riders. The glasses are designed to assist those of us who struggle with constantly looking down- they have a slit in the middle and the rest you can’t see through- and who are equally constantly being told to “look where you’re going!”. A statement that I’m sure more than a few of us can relate to.

Here’s where the story gets interesting (assuming you have the same level of nerdy interest that I do). The glasses get good reviews and on the face of it, they serve their purpose. If you are looking down, wearing the glasses will make you look up. It’s true. It’s that or run blind when wearing them, and so naturally they show some effectiveness.

But they are also a good example of where we have an end goal- to look up- and we consider that in isolation to how the rest of the body functions. On to our merry wanderings around our incredible body.

The precursor to this discussion is adjusting a belief that many people hold that much of our structure is fixed. This is an especially tightly held belief when it comes to the skull. What is, in fact, true however is the bones of the skull have the capacity for a lot of movement, and when operating in a parasympathetic state (when we aren’t under physical threat) coordinate with the rest of the body in movement.

The eye sockets are no exception.

If we isolate our discussion to the eye sockets and eyeballs, their position and function change between the parasympathetic and fight/flight nervous system. In the parasympathetic, the eye sockets are part of our front diagonal lines (so positioned more like that of a horse), with the eyeball itself maintaining a stable relationship to the upper, outer corner of the socket, and the top of the head (so the distance between the top of the eyeball and the top of the head stays the same).

In parasympathetic movement, it’s the eye socket the moves, and the eyeball stays stable. This allows for stability of the optic nerve into the brain and minimizes friction and wear and tear.

If you didn’t consider your eye sockets to be mobile, now you do. The eyeball position in the socket also relates to the position of the femoral and humeral heads in their socket. Your entire body interrelates. So as one shifts and moves, so do the others.

In the sympathetic or fight/ flight nervous system, however, things start to shift. Our aim is to limit sensory input and hone our attention in on the object of threat; consequently, our eye sockets rotate in and down, which naturally alters our gaze in the same direction.

It’s not only the sockets that do this; the entire structure of our body, including the shoulder girdle and pelvis have coordinated patterns that sit within the fight flight reflex.

Zooming out, the majority of people are in a state where they are operating more from their sympathetic nervous system than not. In that state, the brain is making the choice to focus their visual field this way. It’s way if you are told to “look up”, you might manage it for a minute but as soon as your conscious attention is elsewhere, the “habit” creeps back.

If we use a prop or gadget to correct this, a couple of things happen (or don’t happen):

Every position of your body, from the way your foot lands on the ground to your gaze has been chosen by your brain for a purpose. And understanding that is the key to working in a way that supports the system rather than attempting to override it.

The body truly is the most remarkable thing.

Apple Podcasts
Spotify
PrevPreviousThere’s No Such Thing As Being Behind.
NextEmbracing Your Finite TimeNext