{Letters To My Body} Dear Head 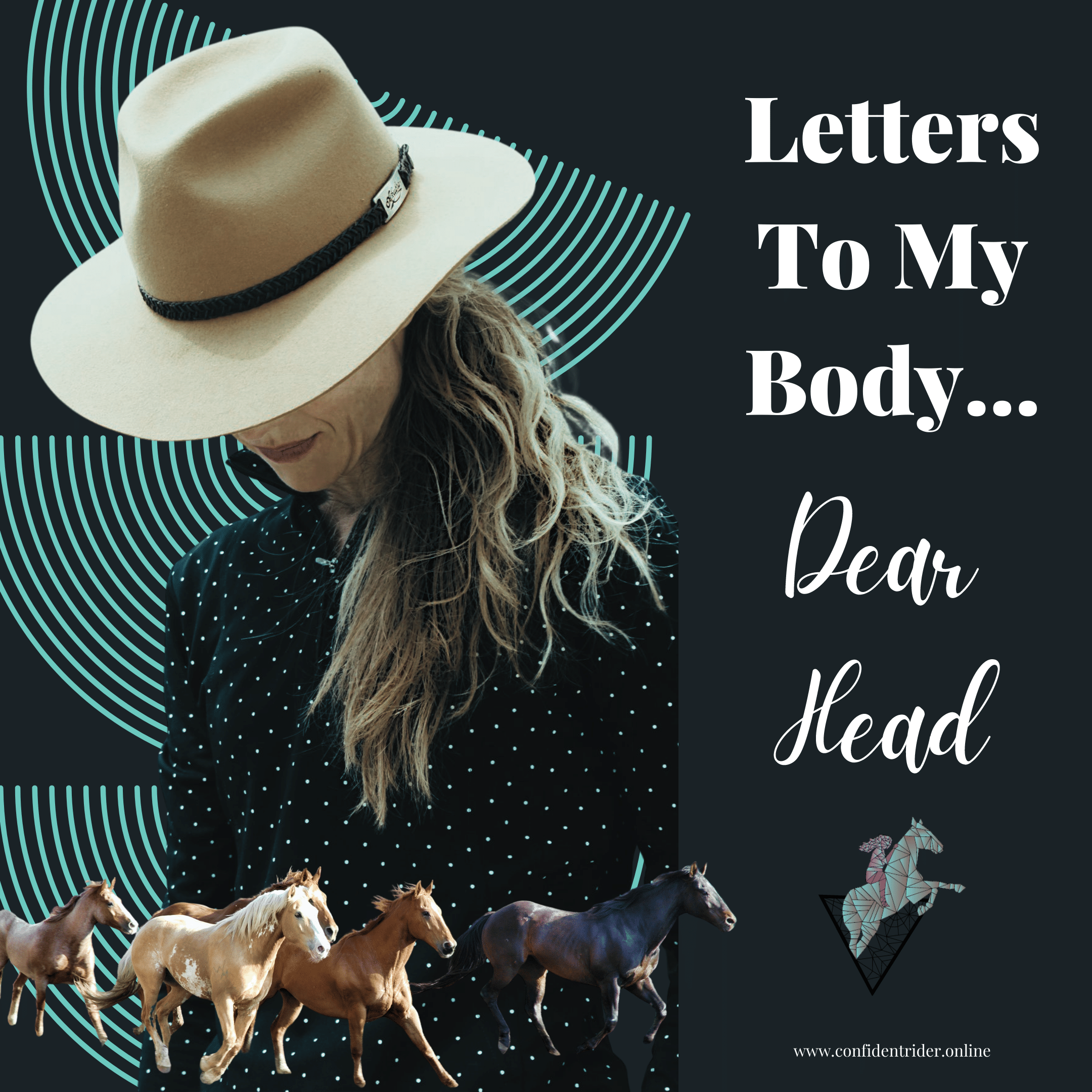 For the longest time we had a complicated relationship. I won’t be so arrogant to assume that I completely have you sorted. To profess sounds like it would create the perfect opportunity for you to help me fall on my face. But I do have a different point of view of you now. A point of view that gives me a certain distance from the things you might tell me, but even more than that, the things that you might have me believe.

When I refer to you head, I’m not refer to the mothership that lives inside you. The brain is a part of you, but it seems to me that if we refer to you, Head, we are referring to a type of intangible conversation. One that accompanies us all day and for some of us, all night, that is not able to be identified by someone shining a light into our skull and pinpointing a geographical location.

Head, those conversations… it’s like they are everywhere and nowhere all at once. And they are completely unique to us. It’s like we all have our very own radio frequency beaming out (or perhaps moreso beaming in) that only we can hear. And the more ironic thing, Head, is that those words that we hear often aren’t the same words that we express. It’s like sometimes we know you aren’t right or true, but you contain us in our own private world that we often try to hide for fear of seeming crazy or kooky or not ok.

I even gave the negative version of you a name.. the Itty Bitty Shitty Committee. Using humour helps me make you seem not so heavy. It helps me step back and go, you aren’t me and I see you all at once.

Anyway. Growing up, I had many conversations with you. Some were good. But many weren’t that good. You talked to me of many things that weren’t so much about me alone but me and other people.

Your body doesn’t look like that, you would say, pointing me to someone over there. We stood together in the musty highschool change room getting ready for swimming and head you told me how to hold my towel so I could hide for the longest time, before getting swallowed by the water.

You said I was too skinny, too flat chested, my hair was too big for my head. You convinced me of that so when other people mentioned it, it was easy to believe them.

I know, I would think. You are just tracing the words I had already written. I know.

When you and I saw people around us suffering we made ourselves blend in. Don’t make life harder, we said to each other. Don’t make any ripples. Be the straight line on the page. Don’t be the cause of someone else’s upset. Be a good girl. Don’t get into trouble.

So, I held my breath and tried to be the straight line.

Head, when I look back, my eyebrows tangle. How exhausting, I think, to always be a straight line, when everyone knows the pencil always slips. How tiring that must be. Was.

And then I think of Minnie. Minnie was my pony. A red mare. Do you know what people say about red mares, Head? They say the strangest things. My red mare was proud and gentle and fierce. So, when you and me, Head, had a rough day, moment, week, she would say, come up. Let me carry you. And I did.

I let her carry us, Head, and she never minded. She never minded my confusion or my upset. I didn’t try to give it to her. I don’t think I even knew I was carrying it. But she took it anyway. She carried it, even when I didn’t know she was.

She always brought me back. My Red Mare.

I went to an astrologer once. I wanted her to tell me what was going to happen. I wanted her to map it out so I could relax and say, see? It’s not up to me. It’s already happening. It’s written in a map, in the stars.

Are there horses? I asked. Horses in my future? Do I work with horses?

No, she replied. No horses.

I paid her money, Head, smiled, and thanked her. But inside me and you didn’t like her.

20 years later, Head, is it too late to ask for a refund? If I’m the norm, I hope she’s in a different line of work.

Head, for the longest time, my work revolved around you. I blamed you for a lot. I gave you a lot of power.

I though, Head, you know what? I think getting you under control is the key. I will flip my thoughts. I will write the affirmations. I will focus on what it is I want. I will do all the things.

Sometimes it worked, Head, but you and I both know that you were always planning your own Shawshank Redemption. You might have been locked in a room, but I didn’t know you had a small spoon that you were using to dig your way out. I convinced myself that I had the answer, thrown away the lock and key, forgetting that you were the one who built the room in the first place.

Now I work differently, live differently. I may not understand you all the time, but I get where you are coming from. I get that you are loudspeaker but something else hits play. I get that now.

Head, I’ve been studying a lot. You know that. You’ve been with me the whole time. And I know it sounds cliché, but …. You’ve changed.

I don’t hear from you as much as I used to. And I get the feeling you like it. You’ve unbuttoned your jeans, sat back on the couch and been like, thank God for that.

So, here’s what I know now, Head (I’m preaching to the converted, right?). I now know that inside the edges of my skin lives a super-highway. It’s called my nervous system. It’s collecting information, feeding information back to the mothership, back to my brain. Our brain.

The superhighway is designed to be in free flow. It should be like New York from the window of a plane. So many lights. So much movement. I didn’t know it was that big, I would say, nose pressed up against the window. It goes forever!

Our nervous system from the window of a plane.

But then, you see, what should be New York can become a country town with a single street light. We fly over and think, where’s the airport? We don’t know where to land. It’s so dark. It is safe to come down? We watch the CCTV.

The radio controller (that’s you Head) in New York has so many options, so many things to pay attention to. The lights are moving, changing, responding. No two moments the same. You don’t get stuck here, Head, because you’re taking it all in. You’re alive. It’s so big, you marvel.

But for some of us, Head, in some moments, we become the single street light. And we get stuck. We keep looking and think, it seems the same? Do you notice anything changing?

We keep staring at the screen, not noticing that the battery has died and now the screen is stuck.

I understand now. I understand the way you talk to me depends on whether my nervous system is a map of New York or Single Street Light Town. And that all the years I was trying to get you to change, I didn’t adjust the map or change the batteries. You were just telling me what you saw, but the view was staying the same.

I’ve changed the map now, Head, and I don’t know about you, but it feels like we are friends. What do you think, Head?

Shall we take another spin across the skies?

Afterword: Notes on Controlling Your Head. Or attempting to.

It’s a usual state of affairs that people approach the challenges of confidence, negative self-talk, negative beliefs and everything in between from the level of the mind. If you type in a google search or open any text concerned with wellbeing and the mind, you will find endless sources of encouragement that talk about controlling your focus, controlling your thoughts, thinking positive, how to eliminate negative self-talk.

The list is endless. I know most of all of what is there because I’ve not only lived it, I’ve taught it. The thing with trying to control your mind or your thoughts is that you are always behind the eight ball.

Changing your focus also exists in a binary. To focus on what you want, you must first recognize what you don’t want.

It’s easy to get into a situation where we feel like we’re chasing our tails, or we feel shamed or ashamed for our inability to create the type of mindscape we are told is possible.

We tighten, we control, and we exhaust ourselves.

My work now centres on the nervous system and the brain; our thoughts are simply biproducts of where our nervous system is sitting. Within the sympathetic or survival nervous system, there are seven motor reflex responses, seven different ways our body’s change in response to threat. And in line with those changes lives a template of behaviors and thought patterns; a shared human experience. Evidence of our shared humanity.

Understanding your nervous system sheds light on why you experience the things that you do at the level of your mind. It allows you to understand why your Head is the way that it is. Why it thinks the thoughts that it does. And why it’s ultimately doing its best to protect you.

Trying to change your Head without addressing or understanding your nervous system will have limited success. You are trying to change what you see on the screen without noticing the screen may be stuck, or the program you are watching is running on repeat. It’s a nevery ending loop.

Moving yourself to a place where your nervous system is adaptable means things are always changing. You are always changing, responding, adapting. You are no longer a Single Street Light Town. In the best possible way, you are New York. Your brain sees the options, the opportunities and whispers what is sees to your Head.

Change your nervous system and your thoughts change also. But not through force or control. As a natural biproduct of a system that’s engaged, mobile and present.

Apple Podcasts
Spotify
PrevPreviousMeeting Reality Without Embarrassment
NextHow Do You Define Threshold? How Do You Know If You’re Over Or Under Yours?Next