In the thick of it- Dealing with Criticism 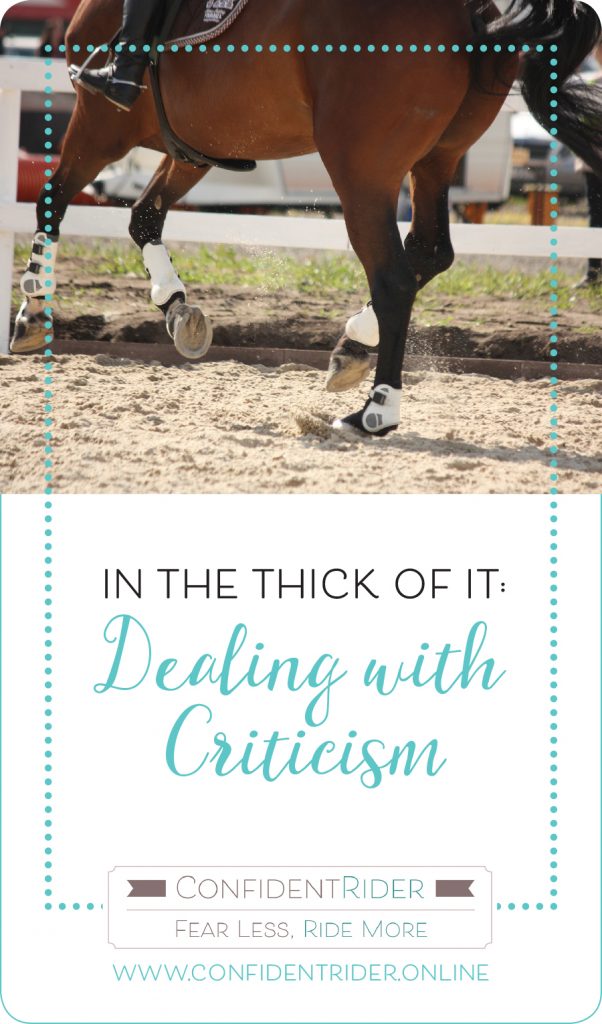 I’ve been trying to think of a specific example to share with you of times where I have been deflated by criticism- and there have been many times- but I couldn’t actually remember exact words or conversations. Instead, I remember feelings. That sensation in your gut when it gets all tight and you feel like you might be sick. The stinging disappointment of someone interpreting your well intentioned efforts the “wrong way”. The prickly heat in your cheeks when you have put yourself forward and experienced judgment or ridicule as a result. There’s no two ways about it; it really sucks.

For a while there, I thought that maybe I needed to develop a thicker skin. Toughen up. Care less. Maybe develop my own gang sign and say “whatever” a lot. But the reality is, that’s not who I am. And what’s more, it’s not what I want.

When people say to me, “I just need to toughen up” or “I need to get a thicker skin”, part of me yells no! We don’t need riders who are tough, uncaring, thick skinned and irreverent. It’s ok to care what other people think; it’s shows compassion, empathy, kindness, concern. All excellent qualities. The problems arise when we allow the thoughts and opinions of others to inform our decisions and our actions; the problem arises when we allow the dreams that we want for our riding to be unduly influenced by outside forces.

The reality is, as soon as you move outside of your comfort zone; as soon as you do anything that involves expanding yourself as a rider, competing, riding in front of others, taking lessons, you open yourself up to criticism. It’s the nature of the beast. Do more, experience more- the good, the bad and the ugly.

The funny thing is, there have been times where I have been the target of criticism and it has had very little effect. Water off a duck’s back. And there have been other times where I have wanted to go and hide in a cupboard. In a large box. On the back of the truck driving me far, far away. When I think about why this is, it usually has very little to do with the person doing the criticizing or the actual criticism itself; instead it taps into a part of my psyche that is already feeling a little bit fragile. It taps into the part of me that thought maybe I wasn’t… enough.

For instance, if you attend a competition or clinic and harbor thoughts that you are out of your league, don’t deserve to be there, or aren’t good enough, chances are any criticism that highlights this part of you is go to hurt. Why? Because it’s scratching up against an unhealthy thought process that you yourself have been nurturing and cultivating.

Criticism itself is not the problem; the problem is the negative, limiting and destructive beliefs that we hold. The criticism simply shines a light on the parts of ourselves we like to pretend isn’t there.

The solution is actually very simple and very challenging; to develop into the kind of rider who can deal effectively with criticism you have to feel good about yourself. If you can get to the point where you feel good about yourself, your intentions and your riding, criticism becomes like oil to water. You can see it, it’s distinct, and you can separate it out from the main body of liquid beneath. You can separate it from the core of who you are.

Originally, when I started writing this, I was going to give you some tips about dealing with criticism- and I am going to do that in a separate post now- but to really get to the stage where you aren’t derailed by the thoughts of others and still get to keep you softness, you have to dig deep. Find out what is really irking you. And then find a solution for it.

It can be helpful to separate yourself out from the immediacy of the situation; view yourself from the perspective of a third party. If you were giving advice to this person, dealing with this criticism, what would you tell them? What is it that they believe about this situation that is really causing the problem?

And what’s more, what could they do to move forward?

Be the guardian of your own mind. There is infinite strength in kindness and sometimes the person we forget to extend it to is ourselves.

xx Jane
[/et_pb_text][et_pb_text _builder_version=”3.0.87″ text_font_size=”19″ text_line_height=”1.8em” background_size=”initial” background_position=”top_left” background_repeat=”repeat” border_style=”solid”]PS. If you have read this and are thinking, well yes, that’s all well and good and I would LOVE to feel that way, then I can actually be of help. Lacking confidence, getting derailed easily by criticism, not enjoying riding or competing as much as you should be…. well, it gets pretty boring after a while. And it’s not like there isn’t anything you can do about it- there is! Don’t settle for ho-hum, come and join JoyRide. It’s only $30 USD per month and I will take you through a progressive, practical process that will get your head on straight so you can ride and feel the way you want.

You can check out JoyRide by clicking the button below!