Dropping the “Just” ~ Letting Go Of The Need To Compare 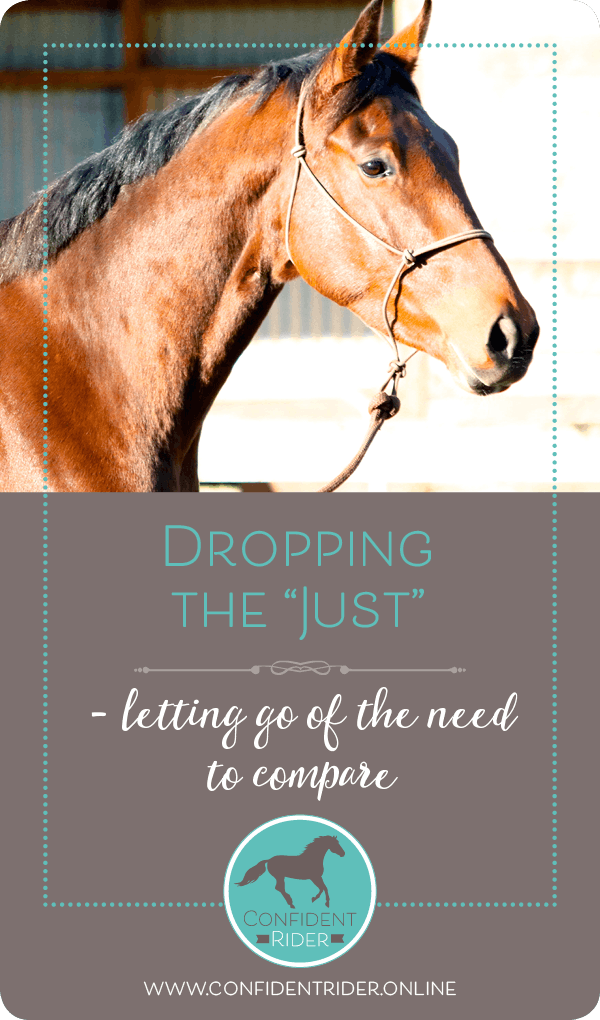 I’ve spent most of my life living as an over-apologizer. I’m sure that some of you out there will relate. Chances are that if you step on my foot, accidently whack me with your bag or ram me with your trolley in the supermarket, I will immediately and sincerely apologize. Actually not apologizing requires a considerable amount of effort on my part (I imagine that to be similar in effort to swallowing ones own tongue) so honed is my internal apologizing system.

The second thing I profess to is that I am an over-volunteerer. That’s right. If I am watching a presentation or listening to you give a talk, you can rest assured that if you ask for a volunteer,

I will offer myself forward for the job. There’s only so much silence to a request I can handle before I feel my arm lifting of its on accord, and next thing I find myself front and centre stage.

My over-volunteering tendencies (maybe let’s say instead I am a “participator”?) have led me to some interesting experiences. I have been a part of a magic show and then the “pretend” support person while someone was going through “labour” to demonstrate how to be helpful to a real person in such a situation (sidenote: I don’t recommend this.).

In the latter example I felt that the other person was a bit too “into it” for my liking, but that’s a whole other story. I still have Giles’ words “well, you did volunteer to go up there” ringing in my ears as I voiced my concerns that her unwillingness to step out of the role at what I saw to be an appropriate time was somewhat disturbing.

But you know the other thing that I used to do? I used to use the word “just” like some sort of linguistic confetti. Just is one of those seemingly harmless but altogether insidious four letter words that diminishes everything that comes before and follows after it. In my work now as a coach, I am keenly aware of the power of language. The words we use to describe ourselves, our challenges, situation and achievement are a litmus test of how ultimately we feel about ourselves in terms of our beliefs, the framework we are operating from (be that positive or negative) and the amount of resourcefulness we feel moving forward.

In a coaching capacity, many of the interactions I have in the first instance are in writing and I get to see solid examples of the words people use to communicate their current state of play and their celebrations. I also have a super awesome and active Facebook group connected to my membership program, JoyRide, and I am always on the lookout for that little word. Just.

I jumped this weekend! But it was just 80cm.

I got out there and competed for the first time, but it was just in the novice classes.

I rode my horse but we just trotted.

The use of just is used to diminish an achievement by way of comparing you to “something else”. In most cases, that “something else” is not quite clear, but it brings to light an internal ranking system that prevents us from fully celebrating our achievements.

It’s like saying, I did this and it was huge for me but I know other people are out there doing way bigger, badder and better things so it’s really no big deal.

But you know what? It is a big deal. It’s a big deal to you. And when it comes to celebrating personal milestones or daily marks of progress, those big deals are about as big as they come. Playing them down means you are ripping yourself off from the full magnificence and joy that basking in an achievement can offer, and to my mind, that seems like something we should do our best to avoid.

What other people are doing and achieving is completely irrelevant to your own achievements. Adding a “just” clause to your celebrations is the ultimate self-inflicted backhanded compliment. It adds no value whatsoever and serves no positive purpose.

So the next time you share something good that happened, or celebrate an achievement refrain from adding any just clauses or qualifying statements. You don’t have to justify, reduce or downplay it. Instead, enjoy it, own it and let others do the same.