How David Duchovny In Concert Can Make You A Better Rider 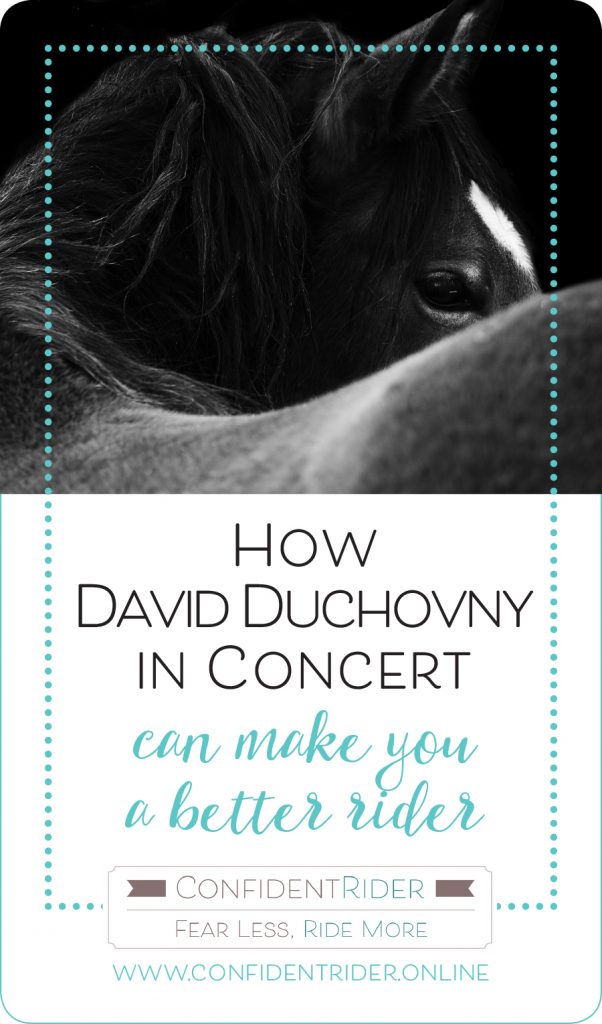 This past weekend I have been in Auckland teaching at a show jumping camp. I was driving up the hill, en route to teach and as I stopped at the traffic lights there were a series of promotional posters stuck to the wall. That’s when I saw it. David Duchovny in Concert.

Now there are two things that I want to mention here. The first is that there was a poster alongside his of a very famous singer, but I have no idea who. I can’t remember. My brain was too busy fixated on the fact that David Duchovny was in concert.

The second thing that happens is that I blew a little snort of air out of my nose; the kind of thing you do when something takes you by surprise and you simultaneously find it a little bit amusing.

It’s possible that I am stuck in the 90’s and you have all been rocking it out to David for a really long time. Me on the other hand? David is Mulder. He belongs with Scully! He’s not a rock star. He has rock star status, but that’s because he fights aliens and stuff and has access to really, really secret files. Not because he belts one out behind the mic.

And then I pulled myself up. And that’s when I said it. Bloody good job David. It takes balls to move outside something you are really well known for and reinvent yourself. I gave him a little round of applause (internally; both hands were still on the wheel). I know nothing of David apart from the X files and a few other things the media reported on that have nothing to do with this blog post. But what I do know is that we all have a lot more in common with Dave than we might think we do.

You see the thing is, for better or for worse, all of us have an identity that we use to define us. Sometimes our identity shifts depending on our situation and circumstance; sometimes it makes us feel like superheroes, and other times, it keeps us trapped in a limiting cycle.

I didn’t directly discuss David this with the riders I worked with, but I could have. Instead, we talked about the courage that it takes to “be” something different; to shift identity and become something new. It takes courage even if it’s something that you desperately want.

Our peer groups and riding comrades often have a bigger say than we think when it comes to us achieving our goals and stepping it up to the next level. Take confidence- or a lack of- for instance. Like attracts like. It’s basic physics. Chances are if you are nervous or anxious about your riding, then you will be surrounded by a group of riders who feel the same. There is a kinship in shared struggle. It’s comforting to know that other riders are sharing the same challenges that we are. I don’t want to go as far as to say that misery loves company- I am not implying that any rider who is nervous is a misery or miserable by any stretch- but what I am saying is that sharing our challenges (and perhaps our struggle or inability to overcome them) is very much socially supported. Think about it. Think how easy it is to chime in with or perpetuate negative conversation, to fuel gossip. People love that stuff!

Conversely, sharing a positive spin, celebrating a win, letting yourself be shiny (I have actually so much to say on this particular topic that I am going to create a whole NEW post about it! I know!), sharing the fact you are committing to change… well, not so much. WE don’t go there as often for fear of being taken “the wrong way” or seeming as though we are “up ourselves” or “a bit full of it”. Been reading too many self help books have we, they ask. It’s classic tall poppy stuff. So we cap it. Make fun of ourselves. Dumb down our achievements.

Anyway, I digress. Let’s go back to the original diatribe on nervous riders (and you can substitute anything you want in here). Say all of the sudden someone makes a move to be more confident, to actively cultivate “being brave” in whatever form is relevant for them. Chances are, if you have been nervous or not pushed the boundaries for a period of time, you changing the way you do this or approach your riding is going to ruffle a few feathers. And not just your own.

When you challenge the identity that you have settled into for a while, those around you who feel comfortable with where you are at the moment feel it. In that moment, they have two choices. They can either choose to be inspired by you and use your new found mojo awesomeness as inspiration for their own progress and movement forward. Or they can try to drag you back. Not everyone chooses the latter, but many do. And if you haven’t primed yourself for the consequences of an identity shift, you may find yourself slipping back to where you started from.

The need to be accepted is a dominant human need. The force is strong with this one. And that is why the trail blazers, those fabulous humans that have forged new paths are often so admired- not only have they thought outside the box and introduced us to something that has shaken up more outdated ways of thinking or operating, but they have done so in the face of what other people think. The need to present what they want to offer to the world is stronger than the need for people to agree with them.

Think about it. How do you view someone who has broken the mold of how you know them? How much easier is it to reinvent yourself away from home (for instance)? Are you braver, more adventurous? How are you currently limited by your peer group or those close to you? Are you acting when you really want to be a singer? Or maybe you want both?

The saying goes that you know who your friends are when you are at your lowest ebb, but I actually think the opposite is the case. The real evidence comes from when you are successful. It’s easy enough to feel charitable when someone is in a “lesser” position to you; our buttons get pushed when instead someone has something that we want and desire. We all know this subliminally, and so our effort to maintain the status quo often overrides our ability to become the best riders and people that we can be.

If you are gearing up for a change, ready to embrace new habits; if you are wanting to ride at that next level, take steps to be more positive, embrace a different training style; if you are going to jump at a 1.10, when you have been below a metre, or actually really want to compete but don’t think you are good enough, be brave. Go for it. It doesn’t mean that you have to change everything that you know, or no longer talk to your friends. It doesn’t mean that you whole world will be turned on its head.

But you need to be aware that there might be a shift. A shift in you and in those around you- and you have to be ready to embrace it. People might wobble a bit. And that’s ok. It’s nothing to do with you (although it might not feel like it). The mantra I made for myself that I want to share with you for these moments is this: success is a filter, and everything that is good comes with me. For a while it might be uncomfortable, even if it’s what you want.

Know why you are doing what you are doing. Be humble. Be kind. Be prepared that you shifting and changing might stir the pot. Actively seek out ways to support yourself. Motivation and inspiration needs daily feeding.

And also know that there is much more waiting for you than you could ever leave behind. And at the end of the day, you have to be like David. Just grab the mic and start to rock it out. People will get used to the idea soon enough. They might even put you on a poster.

Apple Podcasts
Spotify
PrevPreviousHow To Deal With Other People Dissing Your Dreams!
NextKindness, Time & You’ve Got This: Returning to Riding After BabyNext