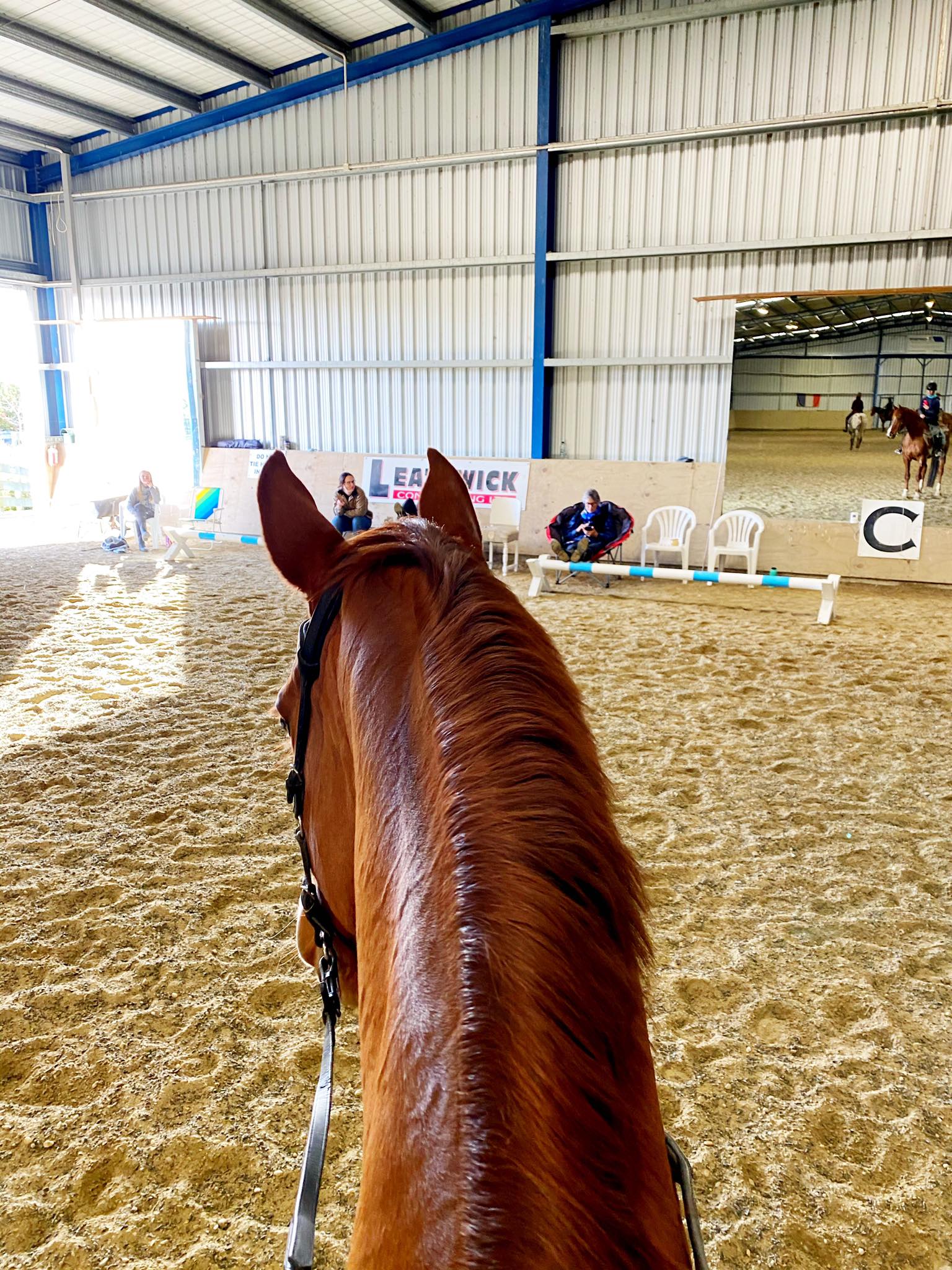 It’s Day One of this week’s Clinic Diaries (I’m running a day behind as I couldn’t keep my eyes open last night)!

So, the initial idea was just to take Dee along to the clinic this week to get another stamp in his passport and increase his Zone of Worldliness outside Little House on the Prairie, but I got somewhat enthusiastic about two weeks back and thought that if there was room, I would take Nadia along for the ride as well. Part of the motivation for this lay also in the fact that despite the fact they work and are ridden independently out and about at home, in a clinic setting they get very attached, and I thought it would be a good opportunity to work through that anxiety in a moderated and supportive environment.

As we were getting ready to leave, the rain teamed down and the wind blew said rain into my face, I questioned whether this was actually a wise idea and but nonetheless, we loaded up and hit the road. I was very optimistic in my weather predictions and kept valiantly declaring that “I’m sure the weather will get better as we head north” but it turned out we would have had to have kept driving to the equator for that to be the case, and we unloaded in the same heinous conditions that we started in.

The kids looked like they’d had a rough night when we brought them out of their sodden little paddock and into the yards in the morning (I also had a rough night thinking about them having a rough night!) but we got ourselves ready and fronted up for the first of the sessions.

The clinic was divided into two groups in the morning and two in the afternoon; having two horses here meant I was part of each and every group and would be tag-teaming ponies throughout the day. I took Dee into the arena first, leaving a very unimpressed Nadia in the yards and we went through some groundwork together under the guidance of the most excellent Ben Longwell. Dee was definitely “up”; obedient but in full Distract-a-Saurus mode as Nadia called out instructions to him from the outside. By his afternoon session, he had settled considerably- more focused, more relaxed- and Nadia was about 50% less stressed to be by herself in the afternoon as compared to the morning, so definitely a win there. The clinic itself runs for 4 days- time was on my side- so I opted to stay on the ground in the afternoon again as opposed to riding, and just keep throwing droplets into our bucket of good experiences in the hope that he will be feeling more settled on Day 2 and we can begin our work together under saddle.

When it was Nadia’s turn, Dee returned the favour by singing out an operatic version of the sound of music to her from across the way and as expected, it made her feel quite unsettled. Whereas a year or so back, I may well have completely “lost her” in this situation (separation anxiety was one of the primary triggers at the start of our time together), now she continued to try hard despite finding Dee’s tunes very seductive. Her concern manifests in getting quite bunched up underneath me- fussy in the contact, moving behind the vertical, feeling like a coiled spring- but we have things working as such that I can work through this with her on board and so this is what we continued to do.

At the end of the second session, she was considerably more relaxed and attentive and beginning to show signs of relaxation in her work, if only a small slither of what we are producing at home.

It’s interesting being in these situations because it is so easy not to “go there”. If I was to take both ponies out independently, I know it would be much easier going and I wouldn’t have the anxiety that I experience taking them out as a pair (as far as their attachment to each other). I tell you, at times, that thought is very appealing! I felt brief moments of deflation as I reflected on how relaxed and lovely things were at home but brought myself back with the reminder that well, this was kind of the point. I want to be able to take them out as a pair and have them be comfortable in their own skin, and in order for that to happen, I have to allow for the messy parts as well.

This morning we are rolling with the same format so I’m going to head out the door and get myself prepped for Day 2. More to report shortly!